So yesterday evening I found my new addiction. It all started around midnight when the game “Infinity Blade” was made available through the AppStore, which I downloaded. Really liked the demo of Citadel.

After around 300 mb of download and installation. Wow….amazing graphics….all this on the iPhone. Really beautiful and when you look around lots of special effects to see. Lights, dark shadows, moving objects, flames and lots more. Music also nice and it just puts you right in the middle of it all. There is just on low, after a few minutes of play: WTF you can’t move around freely? Hmmm… to bad, but beside that and accepting this fact. The game is like “Rage”, everything is on rails. No free moving, there is a fixed path that you have to follow (although at some point you can deviate  from it ad take a side path up the stairs. Enemy are higher in level in this path plus good for exp, gold & items).

The battle system is great and inventive. Tap the lower left or right to dodge the attack. Tap the middle/shield to block. Or parry the attack by swiping at the same direction as the attacker and there’s also the of a weapon lock. Keep tapping to win, you can even see the sparks from the swords clashing. Very nice!

You are able to preform combo’s and deal more damage than regular attacks. There is apparently a a standard combo swiping left, right and left again (or right, left and right). This is cool, but there are hidden combo’s which is harder to find I did one accidentally when I swiped randomly using crisscross swipes. If you think this is enough at some point during battle you will see blue circles hovering  on some part of the enemy, if you tap them, you’ll stab them there for even more damage. Double nice or instance kill even.

Weapons can also deal elemental damages. Like lightning, bzzz….and a cool purple after glow with each stroke. Flame damage, the same effect. The ice damage and effect are not so clear to me, but poison is cool. Just hit them and see how the live bar drop. The elemental damages can be found in swords, but shields apparently can also give them to you. First thought is represented the protection against the elements…but after equipping the spectral shield and a regular sword with no effect. I notice me dealing elemental damage, you can see this you the color of the after swipes.

The magic rings on the other hand also lets you deal elemental damage by casting spells. Which is cool, but not for me. Don’t like wizards. So my ring of choice is the life ring, which allows me to cast regeneration and shield repair).

Equipent are accessible at every moment, except during battle. There are to ways to get them fast. The first thing is try to wear the special helmets which adds +++ to item drops or  +++ to gold (enabling you the buy then, the store list all the weapons).

The mastery of the weapons are a little disappointing. Because all you get is one extra skill point and nothing more. In my opinion not really worth it to master all of them during battle. Why you ask? You can also master them by paying money. Just do this on the lower level ones, which you never going to use any way because of the low stats.

And the skill points distribution is all up to you. Life for extra health. Attack power. Defense for a higher shield count (which decreases when you block an enemy with a higher attack count than you shield defense). And magic for how fast the meter fills. Personal note I’m trying a build with all focus on power and using items to fill in the other stats. It’s kinda like kill or be killed. Which is a working build thanks to the battle system. I managed to injure the god king in the first bloodline and second bloodline. But still being killed by him (him being level 50). And in the third bloodline finally PWND him with me at level 11. I was kinda surprise at the start of bloodline  four, hero saying father I’ll revenge you. Hey I killed him…..stupid. But I think it has to do with the next update of the game. During the ending sequence something happened, not going to say it now for spoilers. Think that in the coming update the battle will go on after defeating god king, with new enemies….maybe something green and high tech 😉

So this is my quick review of the game. Why mentioning new addiction? Ehmm I downloaded it at midnight last night and kept playing it until 4 in the morning….didn’t notice the time….it kinda flew past me. And that’s in my point a good selling point for a game. 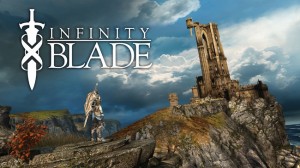