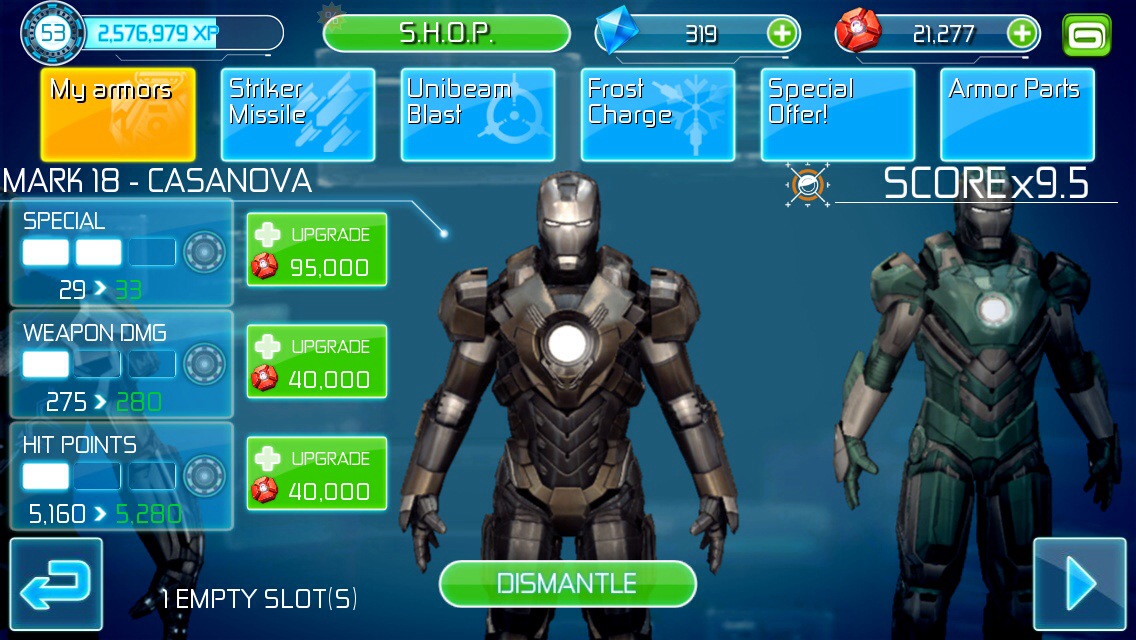 So I’m having an Iron Man 3 game addiction currently apparently. I’ve been playing a lot since the new update. Really wanted to see and try out the new anti missile special. Although the new Nightclub and Disco armor do seem weak. Low multiplier, health, weapon power etc.
Collecting the pieces is very long and troublesome. Pieces don’t spawn that much and only in the dessert and space location.
So really glad that another one was available last week. The Casanova armor, unlocked it (got enough experience). But not enough Stark Credits (415k needed). So after a week of playing and collecting…
First impression: missile special seems ok. Guess need to upgrade to a longer duration. The one downside of the new weapon is that it takes forever to charge…which…makes it less useful then expected.
The other stupid thing is that the weapon skill can only be activated when there are planes or missiles present…which sometimes activates to late and you get hit…sigh…defeats it purpose if you ask me.
Going to upgrade it to the max and see how it does compared to the Piston armor. That is still the best one. 10 seconds invulnerability on a max out special. My choice and go to to avoid the difficult missile clusters.

*Update*
It took a while but finally managed to upgrade the Casanova armor to the max. You got to do 380 times a 10 hit combo for the special weapon, defeat 2400 AIM soldiers for regular weapon & avoid 9000 obstacles for health. But max out armor is sweet. 41 seconds worry free travel against missiles is fine 🙂